Go for an easy EMI scheme which allows you to pay for your orders over a convenient period. A minimum purchase value of Rs. 500 is required to avail the EMI facility and the facility can be availed for tenures of 3, 6, 9 or 12 months.


After checking out, Select the "Credit Card / Debit Card / Net Banking / EMI" option, which will then direct you to the PayU Payment gateway. Select your card and check the installment value and the overall interest charged on the transaction.


These are annualized interest rates charged on a monthly reducing balance, which means that the principal amount is reduced with every EMI and the interest is calculated on the outstanding balance.

No processing or convenience fees are charged on any EMI transactions.

Yay! This item is eligible for replacement.


This product is eligible for a replacement if the return request is raised within 7 days of delivery, and ONLY in the unfortunate event that it is found to be defective. This policy is not applicable to customers who are not happy with the product.

Once the manufacturing defect has been confirmed by our inspection team, we will provide a replacement of the originally ordered product. In case of replacements not being available, you can choose another variant, full store credit or a full refund will be provided.

Confused? Don't be, when there's a Guru to guide the way.

Our Headphone Guru’s Top Recommendation for You

A
A.K.P.
Painful and Poor Setting-up Process, But Once You Done, It Sounds Great!

Chord Poly is really a difficult task to set-up. Set-up process is so poor that at no point you are in confidence that you are heading in the right direction. It's just like shooting in the dark, if your luck favours, you reached at the one step, but now strive for the next! It took me around 7 days to make it fully functional when I was able to stream. But still I couldn't play Files in SD Card from Gofigure app. All I am able to succeed to play from UPnP app. Gofigure app is from Chord Electronics and it should be better, but I can't play my music Files through it because it requires music stored in Playlists form in the SD Card, which I couldn't able to do despite several efforts. Gofigure app can only read music stored in Playlist Form, it can't read normal music files as we save in SD Card. I request from experts at Headphone Zone, please tell me through Email and Phone that how to store music in "Playlist Form in micro SD Card", so that i can use Gofigure app.

After the task of setting-up completed, I started streaming music by Chord Poly through UPnP app by connecting Poly+Mojo to my Amplifier and Speakers. There is no doubt that sound quality was fantastic. Chord Mojo already sounds pretty good, with Poly it's a same level of superb sound quality with added convenience of wireless. I feel that warmth and airiness increased with Poly in comparison to playing only Mojo. Mojo sounds more focused, articulate with clean attack. Mojo and Poly+Mojo have a bit difference in sound characteristics, but both are very nice.

I have another streamer Cambridge Audio CXN V2, which has MRP Rs.99,000 but available at a discount. When I compared CXN V2 with Poly, I found that CXN V2 has more power and energy than Poly, but Poly has more instrument clarity and definition. Poly sounds slightly thin, but only in comparison to CXN V2, not otherwise. But Poly has edge in the form of more clarity and definition. 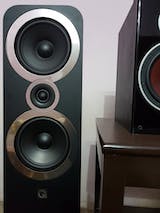 Thank you so much for sharing detailed review with us.
Q&A