Yay! This item is eligible for replacement.


This product is eligible for a replacement if the return request is raised within 7 days of delivery, and ONLY in the unfortunate event that it is found to be defective. This policy is not applicable to customers who are not happy with the product.

Once the manufacturing defect has been confirmed by our inspection team, we will provide a replacement of the originally ordered product. In case of replacements not being available, you can choose another variant, full store credit or a full refund will be provided.

Our Headphone Guru’s Top Recommendation for You

I have been using these for about a week now!
Well making a switch from sony XB55Ap to this was quite difficult, because the bass produced by the sony's couldnt't be compared to ones produced by this and loudness to was noticeable!
But now I'm used to it ... bass is adequate.
I feel its a V-shaped curve, meaning it's emphasizing a lot on the bass and treble!
Treble can get a lil annoying but I tweak the EQ based on the songs I listen to!

I'd say just pick it up, you won't be that disappointed!
Its comfy , touch controls are a lil finicky but its a cool thing to have (when you're comparing it to the apple airpods which cost 3 times this amount).
The microphone is okay , you have to be loud when you're talking to someone over this!

Worth all money..You won't regret buying it but if you are into bass like me you would be a little disappointed as it has very low bass...also the touch controls are quite sensitive so takes time in getting used to it.. 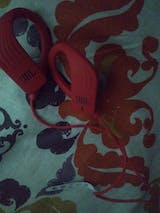 Sounds good, stay in ear, noise cancellation is also effective. However deducted 2 star for very poor mic and flicky touch. Bass is also not comparable to boss or Sony ofcourse not comparable with the price also.

Very nice headphone according to this budget with solid build quality and clear and loud sound experience.