RETURNS & WARRANTY
SAVE WITH DEALS
Save ₹ 4,990

These are simply the top-tier True Wireless earbuds made. The only competitor that is worth comparing it to is the Airpods Pro. And this beats it in every way. It's much more comfortable, sounds great, and is much more compact. But perhaps the biggest USP is the Active Noise Cancellation, which is simply the best anywhere.

Don't sweat it, this Sony - WF-1000XM4 comes with a warranty from Sony that covers manufacturing defects. All products featured on Headphone Zone are backed by an original manufacturer's warranty.

"Best noise cancellation in true wireless earbuds, Excellent, detailed sound. If you’re the sort of person who will appreciate the top-notch performance, the 1000XM4s are a worthwhile investment."

"You won’t find many true wireless earbuds that come close to matching the all-round brilliance of the Sony WF-1000XM4. Clear, detailed bass performance,Wonderful sense of musicality,Comfortable."

"If you want the best true wireless earphones, the Sony WF-1000XM4 has to be in the discussion amongst the most popular models. 360 Reality Audio support, Excellent Isolation, ANC, Foam ear tips"

"The earbuds should be able to carry larger amount of data over Bluetooth, promising better audio quality and some basic support for some high-resolution audio content."

"There is an Ambient Sound mode, which you can enable if you want to listen to your surroundings or talk to someone nearby. WF-1000XM4 also comes with fast pairing support for Android and Windows 10."

"The wireless earbuds are IPX4 water and sweat-resistant and can be used during workouts. They further incorporate the latest BT 5.2 and True Wireless connections for pairing with devices."

Got em from the US and they are a substantial improvement from the XM3s in terms of noise cancelling, bass response and especially detail though only with LDAC. With SBC or AAC they seem indistinguishable from the XM3s to me which I used for almost 2 years. If you have an iPhone, get Airpods or XM3s, the main addition of LDAC doesn't work on ios and to me these seem pointless from that perspective. Water and sweat resistance is a nice touch too. 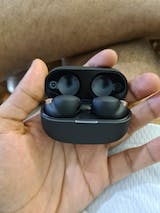 Hi Varun,
It is nice to know that you got your hands on these earbuds way before anyone else! We are glad that it's launched in India as well and people here can now experience the best of noise cancellation. Thank you for such an amazing review on the product as we believe it will definitely help others make their decision!

I bought these last week and just can't take them off my ear! I've always had a liking for Sony audio products. But these XM4s are on another level. I can't compare between various earbuds because I'm not an 'Audiophile' per se. But I think I'm falling in love with music as it travels to my ears through these buds. Following are the music pieces I listened to so far with XM4s and was pleasantly surprised. I'm using Spotify with 'Very High' quality audio stream settings. I've set headphone audio quality to LDAC.

1. Bach - Cello Suites Nos. 1, 2, 3, 4, 5, & 6. - The texture of Cello sound is just outrageous! It almost feels like I can hear the sound of the wood as the bow strokes across the strings.
2. Planet Earth II by Hans Zimmer - Zimmer's earthy compositions shine like diamonds as I could hear every instrument clearly with all their heft. There's no muddiness.
3. Girija Devi - Raga Piloo - Aisi Hori Na Khelo - The way vocals were accentuated and tabla and veena were separated but kept distinct was mind blowing. My brain cells were having virtual Holi inside!
4. Pancham Se Gara - Ravi Shankar & Anoushka Shankar - Again, amazing separation and distinction of instruments. Sitar never felt so lively.
5. The Grudge - Tool - I have never been a fan of metal but thanks to these XM4s, I listened to a whole album of Tool. And their songs are like half an hour long! The best part, for me, was how the buds handled bass. It's not too much or too little. Just the right amount. I'm glad that Sony understands this. They have a separate lineup for bass centric audio products. If you like that you can buy them. But if you like your bass just the right amount, Sony's got your back with products like XM4s.
6. I'm Tired - Labrinth & Zendaya - Oh My Freaking Lord!!! What an experience! It's a vocal heavy composition. And the way XM4s put the vocals forward and then fancy up the whole piece with instrument sound is amazing.


Finally, the ANC. It works great with continuous type noise. Walking on the street, or at a metro station and places like that. And by 'it works great' I mean it works flawlessly. Please don't walk in traffic with ANCs on. It could lead to serious danger because it shuts down virtually everything.

As far as comfort is concerned, I'm wearing them for as long as 4 - 5 hours continuously. Retains battery quite good. Slept off with them on a couple of times. No problem. But after 4 - 5 hours and a truckload of Spotify every human should take a break I guess.

A little note. And it's my personal opinion. I've discovered that XM4s are very good with vocal music. But they shift to another universe altogether if you play instrumental pieces with them. Then the XM4s show what they are actually made of! I remember listening to a Vivaldi piece and suddenly tears were rolling down my eyes. And they play Vivaldi in freaking weddings and anniversary parties. The way those violins were playing with piano movement was so full of life and exciting! And these XM4s were reproducing them exactly they way they were composed. It almost felt like I was sitting in an auditorium and the artists were playing at their best.

Anyway, I'm more than happy with my purchase. It is a bit expensive. But it was well worth it. Thanks.

HI Debraj Das,
We are so happy you took out time & elaborately reviewed the product with a comparison. We are sure this will help our customers to make an even better & informed decision.

I have been using the product for almost a week now and continuously. My take on the product.
1 The built quality is not up to the mark, the magnet is too tight and the case some how feels like a tiny box of plastic.
2. I am using a small eartip, which fits good but there is pain after some time of listening.
3. Music quality is just ok and as I have used other products of sony while comparing I feel this product doesn’t give me the immersive response. Some how I feel the sound is flat and an equaliser control needs to be used while we use this device.
All in all a ok product, while comparing with the price range, much better product are available in the market.
But as a sony fan, I am some what disappointed. But still this add to my collection.

Thank you for the awesome review & ratings, Rushikesh Mehendale!

Hands down thr best earphones I have laid hands upon and when I say that I have used the likes of monster turbine, beats studio 2.0 and the usual Samsung Buds + and Buds Live.
Nothing comes close to these in earphones category and the bass is now intruding in thr category of headphones. Can't write a review about Sony !#!!$!$!$@$@ (the only bad thing is sony naming convention) without speaking about the noise cancellation. The noise cancellation is so good that at times you wohld wish less of it because these earplugs will shut the door on all noise from outside. And there comes the wizardy of the sony headphone app to thr rescue. Offers you all thr flexibility you would want to serve your lifestyle. 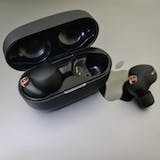 These earphones provide one of the best sound qualities in TWS segment, cleaner bass, wider soundstage and top class when it comes to any genres of music. The ANC is also best in class, and the ambient sound is natural enough. The foam eartips I got didn't fit well enough and so I had to change it to silicon eartips and I was able to feel the difference in ANC and even passive isolation almost instantly, nevertheless it's still amazing. I haven't played with DSEE extreme for long enough, so I don't know the difference, and the battery life is also very good. Now, the catch part is two of the things that I miss with these buds are multipoint connection and good mics. I have had two firmware updates, one back in June when it was released and another one, few days back, and neither of those updates brought multipoint