I had a great experience with Headphone Connect Bengaluru. It was wonderful to try out some high end headphones and also a great collection of iems. At the same time, as a beginner to this audiophile community I was looking more towards to try different entry level headphones but there was only few available. Absence of Sennheisser headphones and also the very popular entry level headphones like Audio technica M50x etc was a little disappointing.
I am really thankful for making available the Shure Aonic 50 and also very happy to see some Grado headphones on your online store. I am really looking forward to the Headphone Connect event in Chennai and even though I understand the difficulty in making available the entire range of headphones you have in these events, I hope to see more beginner level headphones and also headphones from Sennheisser and AKG in Chennai event. It was very encouraging to find that it was the first headphone connect event for most of the people present. I also hope to see some wireless and tws headphones in your next events if possible. Kudos to the whole headphonezone team, everyone seem very committed and passionate and I hope your venture gets bigger and I wish great success in future for all involved.
Thank You

HI Adarsh Sasidharan R,
We are so happy you took out time & elaborately reviewed the product. We are sure this will help our customers to make an even better & informed decision.

A
Aditya Kapil (Mumbai)
Had a great time!

Listened to amazing headphones, IEMs, combos. Met lovely people, both aficionados, and serious, enthusiastic young uns! Good fun.
Find of the day: Kaldas Research's RR1 (electrostatic). At that price...wow! Great to see homegrown companies making high-end equipment available regardless of market size. This is true innovation. Aumkar Chandan take a bow!
One suggestion (else this would have been a 5-star review) - pleeeease get a room with good wifi signal next time. One should be able to pick any rig, and freely be able to stream any song. It's a pain searching through unfamiliar lists on local drives... or having to fiddle around with OTG dongles etc. 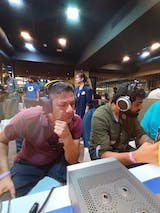 We are glad that you took out some time and shared your experience with us. Thank you so much for the awesome review & ratings as well as for the suggestion. Cheers & Happy Listening, Aditya Kapil!

The visit to Headphone Connect Mumbai was a really nice experience. The vibe and excitement was palpable. It was nice to connect with fellow audiophiles and get their opinions and preferences known. Also, was nice to try out the Flagships of various world famous brands and understand why their price-points are where they are! The Meze's, HiFiMan's, Focal's, STAX, Beyerdynamic etc. were amazing. Also, the IEM space was no less crowded. Lots of interest right from the BLON's to the VE's and Campfire's. One standout for me, and also a very proud moment, was the existence of an Indian brand Kaldas/Altiat. Though they had only a couple of headphones (1 DD and 1 Electrostat) on display, the sound from those was really amazing. The only suggestion from my end would be to host in a venue where network connectivity is not compromised at any point. People would really like to connect online to their music to listen on these devices for which a robust network is a pre-req. Rest all was fine. Many thanks to Raghav for this concept. This was my first one. Hope to attend another one in the future whenever it happens.

We are glad that you took out some time and shared your experience with us. Thank you so much for the awesome review & ratings. Cheers & Happy Listening, Nishant Khanolkar!

Ever since I bought Blon BL-03 from HeadphoneZone, I had been looking at the Headphone Connect section on the website https://www.headphonezone.in/. As soon as the Mumbai event was available for booking I did right away for the cost of Rs. 999.

The event took place at The Leela, Andheri. The event was in a big hall enough for 100 people with tables all around. The entry was smooth with the registration desk asking for my name and giving me a wristband and sticker with my name on it. There were some audiophile stickers also available on the desk for free. T-shirts were available to buy as well. There was at least one staff available at each desk. Lady standing near the registration desk was kind enough to show me around. Left side tables had all the IEMs, and right ones had headphones.

As I was there mainly for the headphones, I went to the right side. I wanted to try out the Meze and Beyerdynamic, but they recommended trying out the expensive stuff first as later when the crowd gathers, it will be difficult to get a chance. I went to the STAX table and was talking to the staff girl about it. From behind came Raghav Somani, Founder, and CEO of the HeadphoneZone. He was a nice and humble person and explained to me certain things. As I was early, he asked me to try out the flagships from STAX, Audeze, and Focal first as they are the best, and trying them later might be difficult due to more people entering. I asked him if there is a difference between the Apple Music Lossless and Lossless High-res. He said he could not hear much difference between the two and that 192Khz is the information that is packed into the audio files and not the frequency response. I wanted to ask him a few more questions at the end of the event but I was in a hurry to leave and he was busy talking to others. My main question was whats the most value for money setup below 30k and what is the most value for money setup overall above which spending money does not give much returns in terms of sound quality.

I tried out the followings:


I liked the Focal Stellia the most. I wanted to try out the other STAX models on the table but there were always people sitting out there as many times I tried. Audeze as well I wanted to try again but was not able to. I wanted to try V Moda and Austrian Audio as well but they were not available. The staff said that I can come over to their office and try those out.

The variety of the headphones and IEMs to try out was amazing. Never in life, did we get to try so many premium audio gears with DACs and Amps costing lakhs. The experience was amazing.

I had brought along with AKG K361BT along to try out portable DACs if it makes any difference but did not get a chance. The first reason is the DACs were occupied most of the time.

The second reason applicable while trying all other headphones was the noise around. With staff explaining to the beginner audiophiles (like me), random chatter, and sound of sounds from open-back headphones, it was difficult to hear the minute sounds that I wanted to hear. I am not complaining about this as it is not possible for the organizers to provide separate quiet places and dedicated gears for trial. But given a quiet place, the experience would have been miles better.

Only wireless earphones they had it Lypertek. I would have liked it if more models like Sony WF-1000XM4 for the earphones, and Sony WH-1000XM4 or Bose QC series. I know audiophiles might not count these as Audiophile grade, but it would be worth keeping and trying for places where not everyone wants the wired planar magnetic headphones with DAC and Amp. This would have been especially helpful because the noise and the noise cancellation from these ANC headphones would have made the music sound better. Also, not everyone has the privilege in places like Mumbai to have a quiet room and listen to open-back headphones with DAC and Amp. I wish to buy open-backs but not possible for me due to the surroundings.

There were mocktails being given to everyone many times, and food options were sandwiches, paneer roll, veg roll, and veg puff. Tea and coffee were also available with cookies.

Overall, amazing idea, work, organizing, and options by the HeadphoneZone team. Total value for money if you love music. 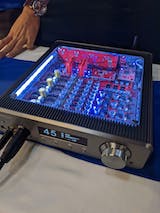 We are glad that you had an amazing experience with us at Headphone Connect, Paresh Koli! Thank you so much for taking some time out and sharing an awesome review & ratings, cheers!

I
Indranil Ghosh (Kolkata)
One of a kind event

Well, this was the first HP connect in Kolkata and the first for me as well. Everything was well organised. All the staff were super helpful throughout the day. It was a good opportunity to do some networking with fellow audiophiles too.
The spread of headphones and IEMs was quite extensive. Liked the Stax setups, Hifiman HE1000Se, Heddphone. Hifiman edition XS was nice surprise at that price point. Audeze LCDX was also good. Among IEMs, not many stood out in front of my Mest MKII however. Chord Mojo 2 failed to shine with my Mest too.
Raghav and his team were very much friendly. They did not try to push any product. On multiple occasions Raghav advised us not to decide on future purchases based on that day's experience and also explained about going for value for money rather than just going for an expensive product.
One negative point, though I am not deducting any star for it, is that due to some reason only 6 HPZ guys flew down to Kolkata as against 14 for other cities so they had lot less luggage to carry, as a result many gears were left out. For example, Hifiman Susvara was absent in Kolkata. In future, I am sure they will rectify it and give the same experience to Kolkata audiophiles as in other cities.

This makes us really happy and we really appreciate the genuine feedback! We're glad that you have such positive thoughts about our team and the company.

S
Sathish Kumar anand (Chennai)
No words to describe. Great boon to music lovers. All under one roof with great environment

This is my first headphone connect. What an experience. A great thanks to team headphonezone for organizing it. I listened close to 40-50 iems and headphones. The time 10-5pm ran ran fast. Completely satisfied. No words to express my feeling. I experienced great from 1k rs to 5lac rs in same place. The staffs was very friendly, hospitable, patient, loving, it aided the experience in a great way. Getting this kind of chance is made possible only because of headphonezones tremendous hard work. Reading through lots of reviews for day and night will not equal experiencing the gears on our own. What I learn after attending the headphone connect is, Theory might fail but live hearing is the only way of getting the geae which satisfies our heart. Huge collection, lovable people, great location, refreshments made this event unforgettable experience in my life. My first experience to cherish. Kudos to team headphone zone.

Varun and Praveen were kind enough to give their personal Bluetooth earphones for me to decide on buying the best one..Truly a pleasure to listen to top IEMs...looking forward to attend more events like this...