Don't sweat it, this BLON - BL-Max comes with a warranty from BLON that covers manufacturing defects. All products featured on Headphone Zone are backed by an original manufacturer's warranty.

"The BLON BL-Max is a slightly different take on the BLON house sound. It brings better sub-bass extension and a little extra lower-treble energy but maintains a buttery smooth presentation."

So I was kind of worried how will it be as I saw some reviews and most of them were saying its big and comfort issues but nah mate, it feels real good to wear, also doesn't feel heavy as those ear supports(or whatever they are called) help in the weight distribution and it works like a charm. No comfort issues for me. Though it took me a while understanding which side is left or right to put the 2pin connector, but then i had this Poweramp equalizer and i shifted channels to left and right simultaneously to figure out sides. (LATER I FOUND THAT (L/R) is written really small on the both of them) (I didn't read the manual at first lol).

Then comes the sound part and dudeeeee this little chunky beast was sounding just normal flat as all iem(s) should but when I set it to Bass and treble and configued according to my taste, ahhh that shit was heavenly.
I'd say, IGNORE the NEGATIVE YOUTUBE REVIEWS (those are literally for nerds). If you are a normal person who enjoys music, just go for it.

I risked my money and it was totally worth it. 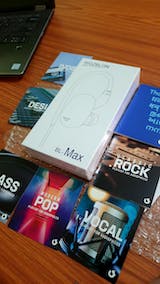