Don't sweat it, this Campfire Audio - Holocene comes with a warranty from Campfire Audio that covers manufacturing defects. All products featured on Headphone Zone are backed by an original manufacturer's warranty.

This is my first pair of iem's and with so many choices, mostly from HPZ, it was a daunting task. Was looking at Etymotic (ruled out coz of the intrusive fit) & Final. I had almost zeroed in on Final B3, when the BFCM tempted me to look into what's on offer. Reading reviews extensively on Campfire Audio products, and their comparison with Final, I settled on the Holocene - the CA Mammoth is of same vintage - and was cheaper - but the sound signature (as expressed in reviews) was not to my taste - so Holocene it was.
The unboxing experience was pleasant - the first layer is a gift wrap - then the box with the colorful facia! The carry pouch is a designer's delight - though the 3 "baggies" are a bit overboard. The actual Holocene is a bit of a jewelry - and probably that is the man-space CA and Final are trying to occupy - the "brown" color is a kind of chrome-gold and lovely.
I am also glad the cable came connected, and did not expect a delicate mmcx connection to be the first butterfinger test. The glow in the dark cable ends are not obtrusive, and the wire itself is hmmm - wiry! My only grouse is that the L and R signs are engraved and has to be checked minutely every time. The placement on the ear takes a bit of time to get used to. The choice of tips provided is abundantly confusing. The connect Final E tip was large for me - and I shifted to the smallest of the Final set and bagged the rest. The feel and fit is now perfect.
I put the Holocene on my Apple Music (iPhone 12 mini) - with an Apple converter - and couldn't be sure if the HiRes was passing through - probably not. But there is a zero concern over power - as these 5.4 V IEM's need very little juice to drive a beautiful sound.
I checked out my usual test cases on the iPhone with CCR(Bad Moon Rising), America(Sandman), Tull-Aqualung, Nana Mouskouri(several), Tracy Chapman(Fast Car), Kenny Rogers(Gambler) and then a bit of Jazz from Cannonball. The female vocals were astounding, the instruments clearly separated, male vocal acceptable, Sax was good but lacked the lifting mesmerism.
Deciding that it was not a fair play for these "jewels", with only the iPhone adapter, I took them to a different plane. I connected them onto my Marantz CD6007, and listened to several CD's alternating between the Holocene and BD Amiron Home.
The Holocene batted admirably with an unfair competitor in fray - vindicating their mastery over vocals (both male and female) and handling instruments far better now with standard content and amp. I listened to the same music on CD's as mentioned on the phone, but now added some Bach - which was again handled adroitly - albeit with a very small soundstage. The final test was with my favorite - Monk(Misterioso) Live on CD. Here I came across a very interesting finding - the voices of the audience came through more in my head with the Holocene, as if I was sitting on a table with them. With the Amiron - the voices receded behind me. This foxed me so much, that I then ran this track on my stereo speakers (Dali Z7+SVS2000) - and again the "voices" receded. Is this what the reviewers call "intimate" when they tested the Holecene - probably! 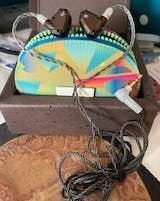