Don't sweat it, this V-MODA - Boom Pro Mic (Unboxed) comes with a warranty from V-MODA that covers manufacturing defects. All products featured on Headphone Zone are backed by an original manufacturer's warranty.

A great solution to convert any wireless headphones to proper headsets. Works well with my Sony-WH1000XM4. Tight fit. Using it for Online meetings and Gaming on Windows 10 PC. The package also includes 3.5 mm audio and mic splitter adaptor for Desktop PCs having 2 separate input jacks.

The V-MODA Boom Pro Mic was an excellent choice, as it fits well despite the curved design of the 3.5mm port on my Sony BT headset (WH-900N) and the mic quality is really good.. The in-line controls for volume adjustment and mute are useful and the sound quality (music playback) is great. I'd have given it a 5 star rating if it had in line track controls too.

A glimpse into the backstory: Why did I purchase this cable?
I had to find some alternative after (security patch disabled HFP for bluetooth on) my office laptop stopped detecting my BT headsets (Sony WH900N, Skullcandy Hesh 3, Marshall Major II BT). The Sony headset (my daily driver) has an excellent mic and calls were super clear when used in BT mode. I tried multiple aux cables but they either didn't fit the curved port on the WH900N or had poor quality mics.

Final Thoughts: I love the fact that noise cancellation can be enabled by simply connecting the cable into the 3.5mm port and powering on the headset. It's a nifty little add-on that adds to the versatility of a BT headset. 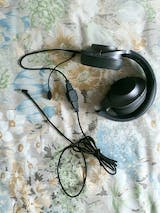 Great companion to Sony XM3 headphones, have used it for a couple of meetings calls and it everyone says i sound great, doesnt pick background noise.

A
Arup Dutta (Dhanbad)
Best for its price

While working from home I was looking for a good microphone, I did not want to go for a desk microphone as they are too cumbersome, in comes boom pro to save the day, it works sooo sooo well, yes it's not perfect you need a bit for a quit room as it picks up noise well too...

After buying a Philips SHP9500, I knew that the next step for me is to get a V-Moda BoomPro Mic. I had seen many reviewers say nothing but good things about this, and after getting my hands on it, I can see why.

Body: The build quality is very good. The 190cm long nylon braided cable is soft and flexible, but well built. It has a single 3.5mm plug on both ends so it is compatible with any device that has a standard 3.5mm headphone jack. The flexible arm feels fragile, but I've never seen anyone complain about it online, so fingers crossed! There's an inline remote that has an impedance based volume control dial, a mic mute button, and a shirt clip at the back. It doesn't have a call/media control button on it so using it with a mobile phone will be a hassle, but I doubt anyone would use this with mobiles. The default termination of the plug is TRRS so you will require a combo headphone/mic jack on the receiving device in order to use the mic. However, they have included a splitter in the box for those who have separate headphone and mic jacks.

Mic: The mic is excellent! Crystal clear and very accurate. Perfect for gaming, streaming, teleconferencing, etc. It does pick up some ambient sounds, but very faintly. I've used many headphones and earphones that had inline mics, but I've always had to tweak my mic settings for echo cancellation, background noise reduction, etc. With the V-Moda BoomPro, I've never had these problems. 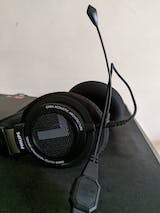 Son is pleased. Paired with Sony 1000 XM3 to PS4, there is a world of difference in hearing and talking. He can play better now. Excellent pricing too grim Headphone Zone compared to the importers in Amazon.

Hey Srikanth, We're happy to hear this positive feedback. Thanks for sharing it with everyone!