THE BIGGEST EVENT OF THE YEAR: FESTIVAL OF SOUND SALE ✨

RETURNS & WARRANTY
SAVE WITH DEALS
Save ₹ 100

There’s no doubt that the CCA CRA+ is a game-changer. The CRA+ is technically capable with improved tuning and fantastic detail retrieval. It does all things right and it is the new benchmark for IEMs in this price segment. At its price, it gives more expensive IEMs a run for their money.

Don't sweat it, this CCA - CRA+ comes with a warranty from CCA that covers manufacturing defects. All products featured on Headphone Zone are backed by an original manufacturer's warranty.

So finally got my CRA+. I Already own the predecessor CRA. My usual gear is my Phone realme x7 max + Venture electronics Avani. I have tried a few dongles, VE Abigail, CX-PRO but avani synergies with CRA+ perfectly.
So these have a bit rounded off bass as compared to CRA thats a great thing. Bass decay is quite fast. Mids are on the neutral sode but quite clean representation, treble is also slightly toned down if compared to OG CRA. This makes overall sound representation more cleaner and precise. These are ahead of CRA in clarity and micro details. Overall timbre is better than CRA, a bit wider soundstage. I am happy with them as they are an improvement over the OG CRA. BLON BL-03 coupled with VE Abigail are still the budget king for me. But these are great for alternative and rock genre. Overall great price to performance ratio. Not suggested for trebleheads, also not for bassheads.
Fitting is not an issue at all, they are light weight, and these are the only pair that looks great even in golden color, and believe me i dont like golden.

I was initially looking forward to buy the KZ ZST-X IEM, and I had even ordered it on a different website since the shipping there was being provided faster. I decided to quickly take a tour through the discord server of Crinacle, the audiophile that has a 1000+ IEM review chart and has collaborated with brands like Blessing and KZ and most of the people asked me to cancel the order and pick up either the Waifu buds, the Moondrop Chu or the best non-KZ KZ IEM, the CCA CRA+. I have kept the waifu buds for later and I decided to order the CRA+ (thank you headphone zone for keeping it in stock). The main reason they had advised me for that is because I own the legendary Samsung Buds Plus and apparently anything offered by KZ would be a tremendous downgrade to my listening taste, and now with an hour of listening time with the CRA+, here are my impressions.
It's got a pleasant V shaped tuning (slightly comparable to the Buds Plus with the IEF neutral target across the chart), and for an IEM that costs less than 2500, compared to the mainstream "junk" out there, this will eat the rest of the competition alive. Most people who are into IEMs and have gotten themselves the Waifu buds (Moondrop Chu) will say that it's the sound benchmark but since I do not have them, I will keep my comments reserved. Now, coming back to the CRA+, the bass is punchy; you WILL feel the oomph but will not bleed, the treble will let you know it's there but it isn't as bright as the buds plus (by a minor margin, but I felt it), and the mids - they could have been better, but I am not complaining. It's a fairly fun sounding IEM, got my head grooving across my listening session, I was smiling throughout the session and nowhere did I feel fatigued, or exhausted or a hint of tinnitus coming in through.

Is it an upgrade to my Galaxy Buds Plus ? No. The Buds Plus are still more detailed, have a slightly wider soundstage, and the bass is slightly more conservative in it's approach, than the CRA+.

Is it a worthy sidegrade ? Absolutely yes. This replaces the Jays One+ that I had bought from Headphone Zone and I have had a good time with it.

Will I recommend it ? Yes.

To who ? Those who aren't expecting a neutral listening experience and those who like a bit of spice, a bit of swagger in their listening sessions.

Would rate it a solid 8.5/10. The cable is a bit finnicky but I can live with it. Also, headphone zone, if you could give a bundled freebie for purchases above a certain threshold, that would be so great. But hey! won't stop me from buying from you all. 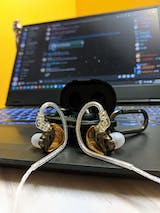 S
Suvadip (Kolkata)
Design and Comfort:
Sound Quality:
Value for Money:
One of the best

Just like everyone I was caught up in the Moondrop Chu hype and I made my mind to buy them over everything else, but when my friend bought it and I listened to it...Lets just say It was not the type of sound I was expecting. The notes didn't have much weight and the sound stage wasn't small but not wide either. I'm not trying to criticize here its just that sound like taste is a really subjective thing. I feel like If you listen to mostly vocals, classical music, folk songs etc The Chu's would be superb for you. But If you want a all rounder headphones to listen to hip hop, pop, edm and watch movies you should go with CRA +'s . In the CRA +, you get note weight, deeper base, bigger sound stage and a v sound signature without the treble spikes of CCA CRA. Now that gives you a really great inoffensive sound.

Chu extremely detailed, tight bass, very smooth vocal midrange. Beautifully balanced, albeit not for bassheads.
+ has deep, rumbly bass which bleeds slightly into the mids, but is not objectionable. Beautiful balanced highs which are very smooth.
Different, but same in the sense they are tuned to the Harmon curve, + has deeper bass, but Chus are a bit better balanced.
Both are fantastic deals for the money and shame IEMs at 10x the price. Lovely.

We appreciate the genuine feedback and we'll share your thoughts with the brand as well. 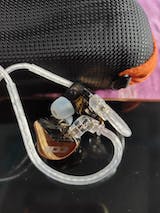 This makes us really happy,Thank you for your genuine feedback, we're glad that you have such positive thoughts about the product and our company.